How To Determine Fault In a Car Accident 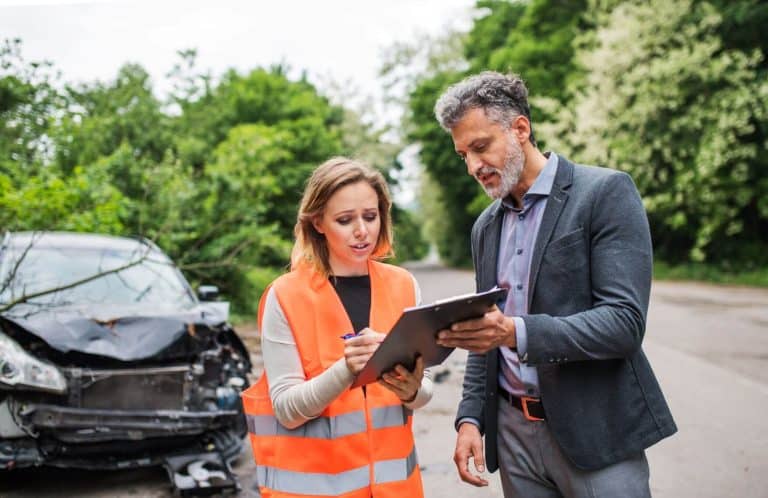 In the aftermath of an auto accident, one of the most important issues at hand is determining who caused the crash.

The question of who is at fault for a car accident is a delicate one—and multiple individuals, businesses, and multimillion-dollar insurance companies will have a stake in the answer.

Because the stakes are so high, individuals or insurance companies may accuse you of fault for an accident you didn’t cause to avoid paying the damages they owe.

This is why it is crucial to know California’s policies and procedures for determining fault after an accident. Securing a legal advocate to guide you through this process may be an essential step to ensure your rights are protected.

The car accident attorneys at PARRIS Law Firm have created this guide to ensure you understand your right to fair compensation after an accident.

Fault after a car accident is often assigned to a “negligent” driver. Legally, negligence refers to a failure to behave with the level of care that an average person would display in a similar situation (see Cornell’s Legal Information Institute for a more thorough definition).

Authorities deem drivers “negligent” when they breach a legal duty (that is, the duty to drive responsibly) and cause damage to someone else, whether through speeding, driving while impaired, or failing to obey traffic laws.

However, multiple drivers can be negligent simultaneously, causing an accident. Different states have different rules for assigning fault in cases like these.

Let’s use the following example: you are speeding on the freeway when a driver in the lane over merges without signaling into yours, hitting the side of your car. The other driver is found to be 75% at fault for failing to yield, but you are found 25% at fault for speeding.

States with contributory negligence laws prevent drivers with any degree of fault (even 1%) from pursuing a claim for damages against the other party. If the above accident were to occur in Alabama, Maryland, North Carolina, Virginia, or Washington D.C., neither party would recover any damages.

Laws in modified comparative negligence states prevent negligent drivers from pursuing compensation if their liability is greater than 50% or 51%, depending on the state. In states like these, you would be able to pursue a claim for damages, but the other party would not.

California is a pure comparative negligence state. If you are deemed partially at fault for the accident that hurt you, the amount of damages you recover may be reduced based on your percentage of liability for the collision.

In an attempt to control car insurance rates, some states have issued “no-fault” laws that change how insurance companies compensate victims of car accidents.

In a no-fault state, people injured in a car accident file claims and collect compensation from their own insurance company, even if they weren’t at fault.

However, most states (including California) are known as “tort states,” which means that victims injured in car accidents can get compensation from the at-fault driver’s insurance company.

Tort states require at-fault drivers to cover the medical bills, pain and suffering, and property damage of the other party injured in the accident. Because these costs can add up, liability car insurance (bodily injury and property damage coverage for anyone you might injure in a car accident) is usually required by law in these states.

Knowing who is at fault for your accident is absolutely crucial in a tort state like California. The determination will affect whose insurance pays for whose damages, which will in turn affect your ability to be compensated if you are injured in the crash.

Who Determines Fault After a Car Accident?

Now that we know how fault is determined under the law, it’s time to address who determines it. Several entities throughout the legal process may have a say in who takes the blame for car accidents, from the drivers involved to the jury.

Drivers can offer input on who or what they think caused the crash at the scene. This does not mean they should—in fact, discussing fault with the other driver at the scene is never a good idea. Attempting to assign blame immediately after a traumatic event may lead to an unwanted confrontation.

Additionally, anything you say at the scene can and will be used to make a determination of fault. If you apologize for any reason or take the blame for something, an insurance company may assign you a percentage of fault later on in the claims process.

Plus, even if the other driver apologizes and takes the blame for the accident, they may go back on their word later after earning your goodwill at the scene.

The safest way to avoid taking on unnecessary fault for your accident is to call the police, take photos of the scene, and avoid discussing responsibility with anyone except the police, your insurance company, and your attorney.

Witnesses may also play a role in determining who caused an accident. These witnesses often provide an invaluable, third-party perspective into your crash that will help both insurance adjusters and your legal team investigate the crash.

It’s always wise to take their statement as soon as possible after the accident to preserve their recollection of the incident.

When the police arrive at the accident scene, they will speak with you, the other driver, and witnesses to put together a police report. The report will consist of the police officer’s official opinion of what they think happened: the circumstances of the accident, whether or not either driver violated the law, and—sometimes—an assignment of fault.

Notably, police reports are not admissible in court if your case makes it to trial. Nor is the police officer’s determination of fault binding in most cases. Yet, despite this, a police report is treated as invaluable evidence by insurance adjusters and attorneys alike when determining responsibility for the accident.

Sometimes, a police report can wrongly assign blame to a driver who didn’t cause the accident. In such instances, hiring an attorney is crucial to protecting your rights and ensuring justice is served.

Insurance companies often determine who they think was at fault for the crash. Both your insurance and the at-fault driver’s insurance will investigate your accident and determine each party’s fault percentage. Much of this determination is based on police reports, witness statements, photos of the crash’s aftermath, skid marks on the road, and CCTV or security camera footage of the event.

Unfortunately, insurance companies are poised to work against you. It is their job to pay out as little as possible in claims. Sometimes, insurance adjusters may assign a portion of fault to you for an accident you didn’t cause just to avoid paying you the full recovery you deserve. (Read more about insurance bad faith.)

If you find yourself in this position, it is time to secure a car accident attorney that will fight for your rights. A personal injury law firm like PARRIS will be able to conduct a thorough investigation into your accident. And unlike the at-fault driver’s insurance company, we fight for you, not against you.

Hiring an attorney to protect your rights may mean the difference between accepting undeserved blame and receiving the compensation you deserve.

If the insurance companies responsible for determining fault for your accident are unable to agree, your case may be arbitrated (depending on the provisions of your insurance policy). This dispute resolution process is much like mediation, except that the arbitrator can render a final decision, similar to a judge or jury.

In arbitration, you and the other driver present your case to the arbitrator, who determines which party is at fault and to what degree. If they decide you are partially to blame, that will reduce the amount of money you can collect.

A car accident lawyer familiar with this process will be invaluable in situations like these. The arbitrator’s decision may affect your life forever, so you’ll need a legal expert to help prepare your case to the fullest extent.

In some cases, a car accident claim makes it all the way to a jury trial.

A jury provides the final determination of fault, which may or may not limit your recovery amount in a comparative negligence state like California. It is crucial to have an attorney with trial experience who can skillfully present your case to a jury, discredit the at-fault driver’s insurance company, and secure the verdict you need.

Partner with a Law Firm that Fights for You

Discussing and determining fault after a car accident is a thorny process. Luckily, you don’t have to walk through it alone.

PARRIS car accident lawyers have been fighting for accident victims since 1985, recovering over $1.9 billion for clients. We can guide you through every step of the claims process, from the day of your accident to the day you make a full recovery.

When an insurance company gives you the runaround, don’t put up with it for even a moment. Call PARRIS Law Firm for a free case review.

We will fight relentlessly to restore your life.

PrevPrevious9 Bad Faith Insurance Practices to Look Out For
NextPG&E Defamation Trial Begins May 17, 2022Next