Car Accident Due to Poor Road Conditions: What to Do 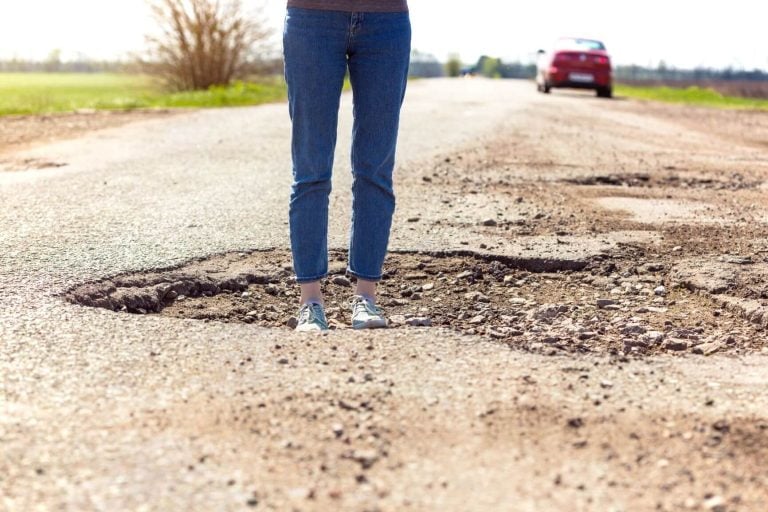 The vast majority of car accidents are caused by human error. Reckless, distracted, drowsy, or drunk drivers account for at least 90% of all fatal accidents in the US.

However, a significant number of car accidents happen due to poor road conditions. A badly designed or maintained road can cause horrific accidents that can change an unsuspecting driver’s life forever.

When poor road conditions cause a car accident, you might believe there is no legal remedy. Indeed, determining the party at fault for your injuries in these cases can be complex. Nevertheless, an experienced attorney will be able to determine which government agency maintains the road where your accident took place—and hold them accountable.

Our legal team at PARRIS has been fighting for victims of government negligence for decades. Your accident isn’t the end of your story, and we’re here to walk you through the recovery process. To begin, we’ve listed some common road conditions that cause car accidents, and how you can recover if you are in one of these collisions.

Bad weather, natural disasters, other car accidents, and even regular use can ravage roads over time. When the agency responsible for maintaining the road fails to do so in a timely manner, the eroded street or highway becomes a hotbed for car wrecks.

Even if a road hasn’t suffered obvious damage, cities and municipalities are required to keep roads well-maintained. If they don’t, they could face liability for any accidents that occur as a result of maintenance neglect.

Whether due to budget cuts, old equipment, or poor design, some roads are inadequately lit. At night, this becomes an enormous safety hazard for anyone on the road. If you’re involved in an accident due to a poorly-lit road, the municipality responsible for maintaining the road may be responsible.

Traffic lights are programmed to keep vehicles moving using both automation and sensors. If a signal’s light, detection system, or programming fails, disastrous accidents can result. In the case a signal causes a traffic accident, the fault for your accident would likely fall with the company that programmed the light and the municipality that maintains the light.

Road signs are posted for a reason. A missing yield sign at a roundabout or a missing stop sign at an intersection can cause horrific T-bone collisions. Even a missing curve warning on a mountain road can have tragic consequences. If a city or county was responsible for replacing a sign, yet failed to do so in a reasonable time, then they might be liable for your accident.

Trees and bushes can make roads more pleasant, but when not properly maintained, they can obstruct a driver’s view. Overgrown foliage could block the driver from seeing a traffic light, a curve, or an intersection. When the foliage abutting a road isn’t well-maintained, the agencies responsible for trimming the trees and bushes could be liable for your accident.

The vast majority of drivers give no thought to a road’s design when driving, yet it remains one of the most crucial factors affecting driver safety.

A road’s design is shaped by several factors:

Despite all these considerations, some road designers make errors when designing and regulating intersections. When an intersection’s design results in multiple traffic accidents, the agency that maintains the road is responsible for making it safer. Unfortunately, many agencies fail to do this, and these poor road conditions have caused several life-altering car accidents.

Such was the case for one of our clients, a 65-year-old career prosecutor who suffered a catastrophic brain injury when a car made a left turn in front of his motorcycle on a desert highway. The car was making an unprotected left turn at a “skewed” intersection—one that had been the site of ten prior accidents. The agency responsible for maintaining the intersection, Caltrans, knew of the dangers of the intersection, yet failed to act. As a result, Caltrans was found liable for our client’s injuries. They paid $31.5 million.

Construction zones are some of the most dangerous areas of California’s highways. According to the National Work Zone Safety Information Clearinghouse, 68 fatal crashes took place in California construction zones in 2019. Reckless driving remains the primary cause of work zone collisions, but sometimes the negligent design and placement of the zone itself can cause accidents.

Unfortunately, one of our clients was the victim of such negligence. A man was riding home on his motorcycle through a work zone when he hit a patch of gravel left on the road by the construction company. The man lost control of his motorcycle and fell off, suffering fatal injuries.

Both the construction company and the city that hire it was found liable for creating a dangerous condition on the roadway, refusing to warn drivers, and deliberately choosing to keep the road open despite these conditions. PARRIS secured a $4 million wrongful death settlement before trial on behalf of the decedent’s children.

After a Car Accident Due to Poor Road Conditions, Who Is Responsible?

Cities, counties, and states are responsible for keeping roadways safe in the U.S. However determining which agency is responsible for which road isn’t always an easy task.

In California, most freeways and highways are maintained by Caltrans, the state’s department of transportation. City streets are often maintained by cities, while the county repairs unincorporated roads.

To make things even more complex, some roads, such as those within shopping centers, are privately owned and maintained.

When It’s the Government’s Fault

Most of the time, however, accidents caused by poor road conditions are the government’s responsibility—either a city, county, or state.

To hold these entities responsible, you must file what’s called a government claim (the first step to any lawsuit against the government) within six months of the date of your injury. This is a much shorter timeframe than that of a lawsuit against a private entity (i.e. a negligent driver).

Time is of the essence. When a road defect has caused or contributed to your accident, we recommend speaking to a lawyer as soon as possible.

PARRIS Will Help You Recover

Thankfully, you don’t need to worry about knowing who is responsible for maintaining which road. After a car accident due to poor road conditions, you deserve to focus on your recovery. Your attorney will worry about liability, filing deadlines, and fighting for you in court.

At PARRIS, our attorneys have what it takes to win—and we’ll fight relentlessly for you until your life is restored.

Contact PARRIS today to schedule a free case review with our team.

PrevPreviousPARRIS Lawyers Named to 2023 Best Lawyers® and Best Lawyers: Ones to Watch™ Lists
NextR. Rex Parris and Patricia K. Oliver Named Finalists for Consumer Attorney of the Year by CAOCNext