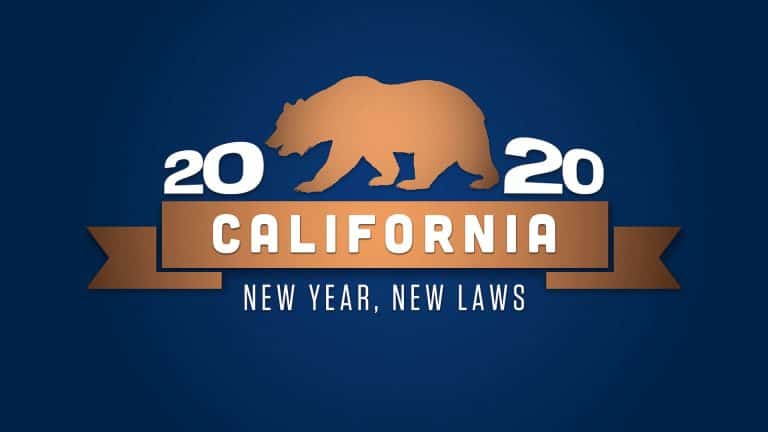 As is the case with every new year, hundreds of new laws take effect in California in 2020. We’ve highlighted just a few of these laws for your information.

For an in-depth review of the changes in California employment laws, read this article on 2020 labor law changes.

REGARDING OUR ANIMAL FRIENDS

Dog Bite Disclosure: Public and private animal shelters must disclose a dog’s biting history. The history covers any bites that broke a person’s skin after the dog was four months of age or older. Violation of this law is punishable by a fine not to exceed $500. AB588. California is a strict liability state when it comes to dog bites – making owners of aggressive dogs liable for injuries from their dog’s bites.

No More Exotic Circus Animals: All animals except for domestic dogs, domestic cats, or domesticated horses are banned from being used in circuses in California. SB313.

Ban on Fur Trapping and Sales: A statewide ban on commercial fur trapping was enacted to protect California’s wildlife population. AB273. California is also the first state to completely ban fur sales and production, which will go into effect on January 1, 2023. AB44.

Cosmetics Animal Testing Ban: California is the first state to ban the sale and import of cosmetics containing ingredients tested on animals, with some exceptions. SB1249.

Sexual Assault Evidence Testing: Sexual assault evidence that is collected through rape kits must be sent to a crime lab within 20 days after it is booked into evidence. The lab then has 120 days to complete the testing. This was enacted as a result of reports that rape kits sat untested for years. SB22.

Usage of Deadly Force by Police: Legal use of deadly force by law enforcement officers is only allowed when it is necessary to defend against an imminent threat of death or serious bodily injury to people. AB392. Prior to this law, deadly force was more broadly permitted during the arrest of a person who allegedly committed a felony, or while that person fled or resisted arrest.

Some Former Felons Can Serve on Juries: Previously, a felony conviction resulted in a lifetime ban from jury duty in California. Now, most people with former felony convictions who have completed their sentences and who are no longer on probation, parole, or under supervision may serve on juries. SB310.

Extension for Reporting Domestic Violence: Previously, victims only had one year to report their partner to law enforcement for domestic violence. Now, the deadline is five years. SB273.

Juvenile Court for Children Under 12: Children under the age of 12 will no longer be prosecuted in the juvenile justice system unless they have committed crimes of murder or forcible sexual assault. It is expected that these cases will instead be handled through programs at hospitals, schools, and child welfare services. SB439.

State Beaches and Parks Smoking Ban: Smoking or using tobacco products is now banned within state parks and beaches. It is also illegal to dispose of cigarette waste in those areas except within appropriate trash receptacles. If either is done, it is punishable with a fine of up to $25. Smoking is still permitted in parking lots or paved roads adjacent to the parks and beaches. SB8.

No More Suspensions for Disruptive Kids: Public and charter schools may no longer suspend students in grades K-8 for disrupting school activities or willfully defying the authority of supervisors, teachers, and administrators. Effective July 1, 2020. SB419.

New Renter Protections: Landlords cannot increase rent more than 5% plus inflation per year. There are also increased protections against no-cause evictions for renters who have been living in their rental for at least a year. AB1482.

Stronger Right to Consumer Privacy: The California Consumer Privacy Act (CCPA) gives you the right to know what information businesses and employers collect on you, why, and whom they share it with. It also allows you to opt out of the sale of your data and/or request the deletion of it. This law applies to businesses and employers that gross $25 million or more per year, buy or sell the personal information for 50,000 or more consumers, or make half or more of their revenue from selling personal info. AB375.

Mandated Health Insurance: Californians are now required to have health insurance. Those who go without health insurance in 2020 will have to a pay a penalty on their April 2021 tax returns. SB78.

Latex Gloves for Food Service Workers: Food service workers can no longer wear latex gloves, which can cause allergic reactions in customers. SB677.

PARRIS Law Firm Is Here For You

We hope you found this article about new laws helpful! Remember to read about the new 2020 California labor laws here. If you feel that your legal rights are being violated at any time, please give PARRIS Law Firm a call at (661) 485-2072 to start your free case consultation.