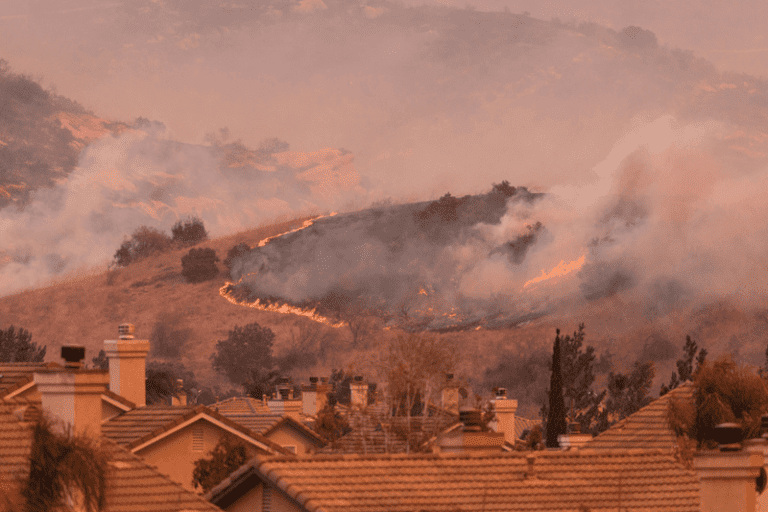 In November 2018, a massive wildfire known as the Woolsey Fire engulfed the dry hills of Los Angeles and Ventura Counties.

The fire broke out around 2:24 p.m. on November 8, 2018, near the Santa Susana Field Laboratory in the Santa Susana Mountains above Simi Valley. By the third day, over 3,000 firefighters were deployed to contain it. It jumped the 101 freeway—prompting its closure—and spread through Agoura Hills, Calabasas, and all the way to Pacific Coast Highway in Malibu. The Malibu fire forced students at Pepperdine University to shelter in place because the only way to get out of the area was to use a backed-up Pacific Coast Highway.

The combination of dry landscape, lack of rain, and the Santa Ana winds made the flames spread quickly. Not only did the National Weather Service issue a Red Flag Warning for the fire-prone weather on November 7, but the California Department of Forestry and Fire Protection also issued a news release on the same day warning residents of the dangerous weather conditions.

For multiple weeks, it has burned close to 100,000 acres of land and has destroyed hundreds of homes and businesses. At a moment’s notice, Woolsey Fire victims were forced to abandon their homes, not knowing if their homes would be there when they returned.

The aftermath of the Woolsey Fire is severe: hundreds of homes were destroyed, many parks and hiking trails are closed indefinitely, and numerous rehabilitation centers were destroyed or damaged. Multiple filming locations and historical sites were also directly affected, such as Paramount Ranch, Peter Strauss Ranch, the former Reagan Ranch, and the mansion where The Bachelor/Bachelorette are filmed. The fire has caused three known deaths, and many animals had to be evacuated to nearby Zuma Beach, where they were tied to poles and lifeguard stations.

In addition to the widespread devastation, the flames spread to the site of a nuclear reactor meltdown in the Santa Susana Complex. This could spread radiological and chemical contamination, causing extensive damage and potential health issues.

What Caused the Woolsey Fire?

The Woolsey Fire was not an act of God; it was an avoidable event.

In the days leading up to it, the National Weather Service issued a Red Flag Warning, advising residents of fire-prone conditions. Despite the signs and warnings, Southern California Edison (SCE) failed to turn off power to areas with Red Flag warnings and gambled with the chance of sparking a wildfire.  SCE blatantly disregarded public safety by failing to control the vegetation growth near its power lines, ignoring the weather warnings, and failing to maintain its electrical equipment safely.

Additionally, Southern California Edison (SCE) issued a preliminary report to the California Public Utility Commission on November 12, 2018, stating that one of its electric substations near the fire ignition point suffered an outage just a few minutes before the fire started.

This report clearly suggests that the Woolsey Fire’s cause is linked to Southern California Edison’s negligence. SCE was required to pay attention to weather conditions and maintain electrical infrastructure and nearby vegetation. Yet, the company had known for decades that its equipment was outdated and improperly maintained.

Edison’s negligence has caused millions of dollars of irreparable damage. On behalf of the affected residents, PARRIS has filed the first class-action lawsuit against Southern California Edison for its role in the Woolsey Fire’s cause. The plaintiffs seek economic and non-economic damages inflicted upon homeowners, renters, and businesses.

Hundreds of people have lost everything in the historically catastrophic Woolsey Fire, and it is our mission to help restore the balance in their lives.

Contact PARRIS for your free fire case evaluation or to join the lawsuit.