Rex Parris: 2018 Person of the Year and Lawyer of the Year
Skip to content 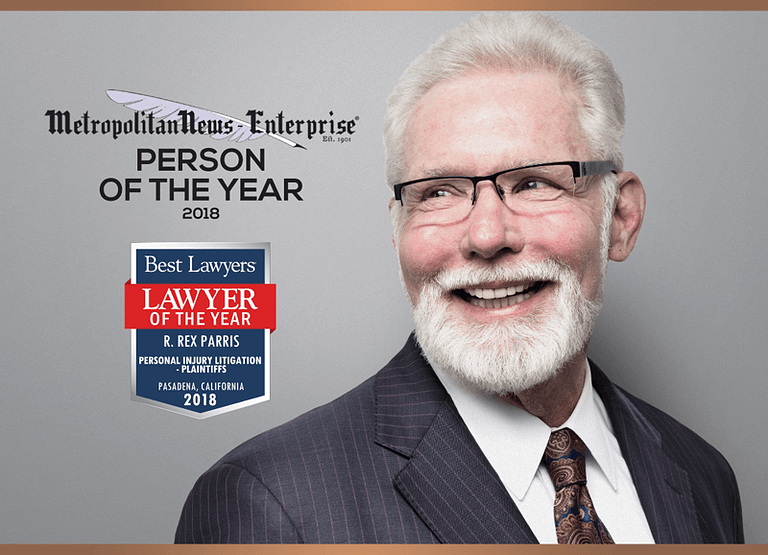 It is well known that our fearless leader, R. Rex Parris, is a renowned personal injury trial attorney, and many have heard of his seven- and eight-figure injury verdicts. Rex obtained some amazing trial results in 2018, but we think it’s the things that Rex does to serve the public, in addition to these results, that really make him stand out. It’s no surprise to us that he was chosen as the 2018 Person of the Year by Metropolitan News, as well as the 2018 Lawyer of the Year by Best Lawyers.

While Rex wears many hats, he has been a trial lawyer for nearly 40 years, so we want to begin by highlighting two jury verdicts that Rex obtained in 2018 that affirm his expertise and skill as a trial lawyer.

This past February, Rex tried a serious injury case on behalf of two brothers against a massive trucking company along with trial attorney Brian Panish. After a three-week jury trial in Los Angeles, the jury returned with a verdict of $56.5 Million for the brothers, providing them with the resources they need to begin to recover from their horrific accident with a big rig.

Just two months later in April, Rex tried another serious injury case on behalf of a 27-year-old Lancaster man who became a quadriplegic as a result of a car accident. After a three-week jury trial, a Los Angeles jury awarded this victim $41.6 Million, which will provide the victim with the 24-hour medical care that he needs for the rest of his life.

Rex also believes in using the legal system to bring about real social change for large groups of people. He spent the summer fighting for the people of the Pico Neighborhood of Santa Monica and spearheaded a five-week voting rights bench trial. The judge ruled that the City of Santa Monica’s at-large voting system violated the California Voting Rights Act and intentionally discriminated against minorities in violation of the California Constitution.

Mayor of Lancaster, Fighting for the People and the Environment Since 2008

For the past decade, Rex has served the community he lives and works in, changing it for the better, as Mayor of Lancaster. Since he became Mayor, we have seen a 31% decrease in crime and a major decrease in gang violence in Lancaster. In addition to this, Lancaster has become the first net-zero city in the United States that produces more power from the sun than it uses from the electrical grid.

Rex has developed a worldwide platform on the science of climate change and is a staunch supporter in the fight against climate change at the local government level. He traveled to Australia in October to be the international keynote speaker for the Cities Power Partnership Summit, Australia’s leading local government climate change forum. Experts and leaders from all over the world met to discuss environmental issues and possible solutions. As a result of Rex’s leadership and action, one Australian news source said of Lancaster, “they have more electricity than they will ever need, and unless someone turns off the sun that will be the story forevermore.”

Intersecting his passion for protecting the environment with the law, Rex represents dozens of firefighters and thousands of residents of Porter Ranch who sustained injuries as a result of SoCal Gas’ negligence in causing the worst gas well blowout in US history. After the gas well blowout, these firefighters helped protect the community and responded to emergency calls from residents, and in turn also suffered from the exposure. This led to Rex stepping in to represent these firefighters who risked their lives protecting residents.

In November, Rex filed the first class-action lawsuit against Southern California Edison for causing the Woolsey Fire. SCE disregarded public safety by failing to control the vegetation growth near its power lines, ignoring weather warnings, and not maintaining its electrical equipment in a safe manner. The Plaintiffs are seeking damages for not only homeowners but renters and businesses as well. Hundreds of people lost everything in this historically catastrophic fire, and Rex and his team are determined to help restore balance in their lives.

While Rex has been an active participant in philanthropy for his community and beyond over the span of his nearly 40-year career, this past year he and his law firm officially launched PARRIS Cares. It is their commitment to serve the residents of the Antelope Valley by improving the safety, education, and health of the community.

Rex and his wife Carrol founded PARRIS Law Firm in 1985 with the goal of building a truly great law firm that serves the community with more than simply legal services. That goal has never changed. Rex continues to innovate and work tirelessly to improve the results the firm provides to clients, make a positive difference in the Antelope Valley through his role as Mayor and through PARRIS Cares, and fight against climate change by encouraging local governments to take action around the world. This is why we are so proud of Rex for his achievements of Metropolitan News’ 2018 Person of the Year and Best Lawyers’ 2018 Lawyer of the Year.

2018 has been a great year, and we are looking forward to the challenges and successes that 2019 will bring.

What Are the Most Common Types of Car Accidents?