R. Rex Parris Honored by the US Environmental Protection Agency 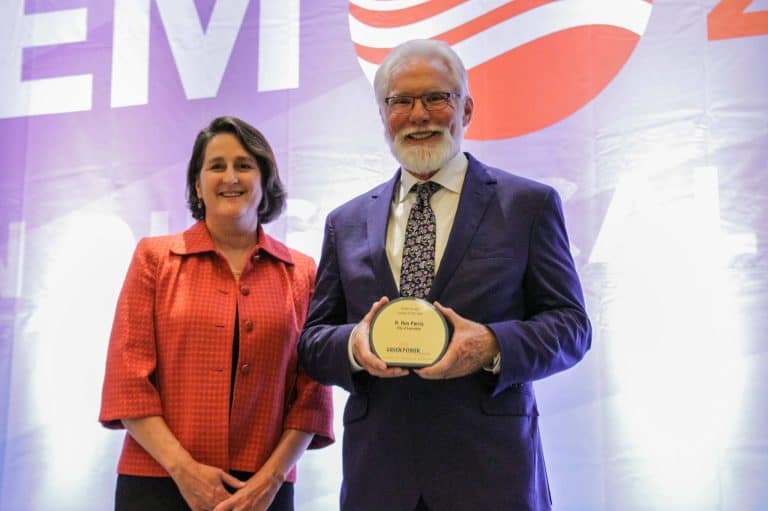 We are proud to share that our founding attorney, R. Rex Parris, was honored by the United States Environmental Protection Agency (EPA). The EPA recognized Rex for his innovative work in creating renewable energy sources within his community. He was presented with the Green Power Leader of the Year Award at the 2019 Renewable Energy Markets Conference in San Diego, CA.

The City of Lancaster was also honored by the EPA with the Green Power Community of the Year Award.  Within Lancaster, Rex Parris helped to create the nation’s first solar thermal power plant, start a partnership between KB Homes with manufacturing giant Build Your Dreams (BYD) to create affordable solar-energy residential communities, helped to create an electric bus manufacturing plant and battery storage facility with BYD, and made the City of Lancaster the world’s first Net-Zero Energy City, among other achievements.

In accepting the award, Rex Parris said, “When we first invested in renewable energy, it was our goal to make the impossible, possible. With our investment in green energy, Lancaster has created jobs, lowered the energy bills of all residents, and ha[s] become the model for how other cities can break free from the destructive energy sources of the past.”

Rex Parris is heavily involved in protecting the environment, not only as Mayor of Lancaster but also as the founding attorney of PARRIS Law Firm.

Rex and PARRIS Law Firm represents thousands of Porter Ranch families, businesses, and firefighters who are victims of the worst gas well blowout in U.S. history. An estimated 100,000 tons of natural gas was released during the blowout because of the negligent behavior of SoCalGas. A UCLA study on air quality and the Blade Report confirmed that SoCalGas failed to properly monitor and maintain the Aliso Canyon gas storage facility for more than 40 years. The report details that SoCalGas had many opportunities to fix the public safety problems that plagued the facility, but instead of addressing them, SoCalGas chose to ignore them.

The PARRIS Law Firm was also the first to file a class-action lawsuit against Southern California Edison for causing the devastating Woolsey Fire that spread through the Santa Susana Mountains, Agoura Hills, Calabasas, and Malibu.

In Bakersfield, CA, Rex and the PARRIS Law Firm represented farmers whose freshwater was contaminated by the negligent actions of several oil companies, obtaining multi-million dollar settlements for the farmers.

Rex Parris is passionately committed to protecting our most precious environmental resources and the people’s legal rights to clean water, soil, and air. We are grateful for the recognition from the EPA for his environmental work. If you believe you are experiencing pollution or a violation of your rights due to a negligent corporation, call us today to start a free case evaluation at (661) 485-2072. Our attorneys have extensive experience and the resources necessary to fight for you against large corporations. You pay no fees until we win.