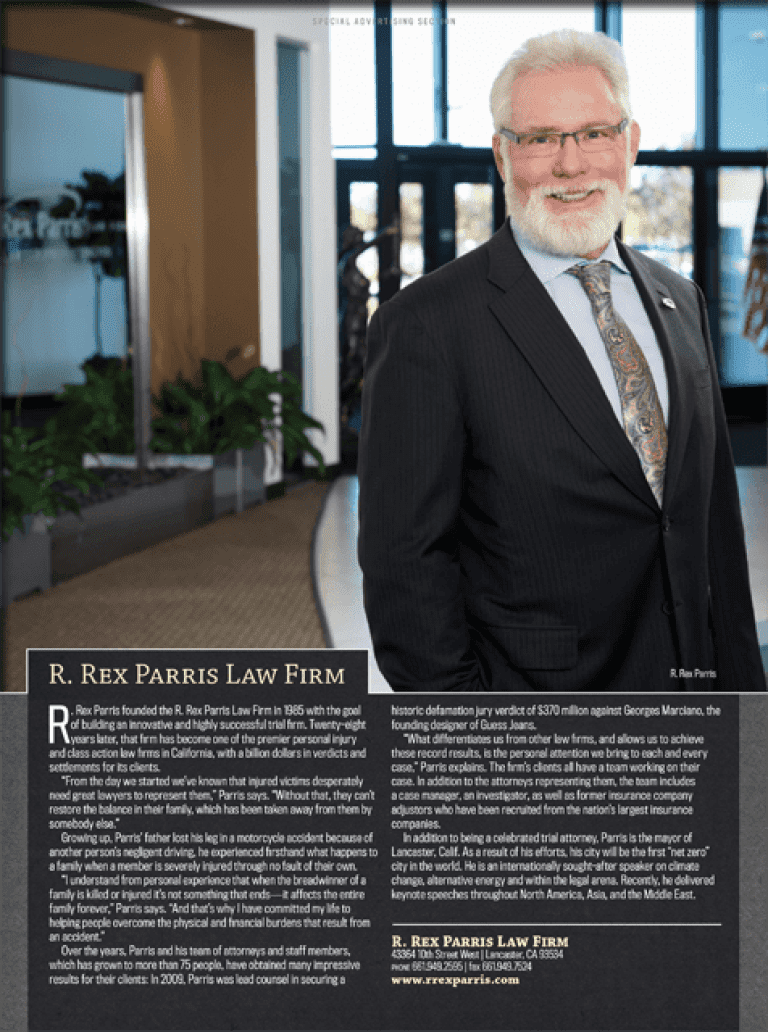 R. Rex Parris founded the Parris Law Firm in 1985 with the goal of building an innovative and highly successful trial firm. Thirty-five years later, that firm has become one of the premier personal injury and class action law firms in California, with over $1.4 billion dollars in verdicts and settlements for its clients.

“From the day we started we’ve known that injured victims desperately need great lawyers to represent them,” Parris says. “Without that, they can’t restore the balance in their family, which has been taken away from them by somebody else.”

Growing up, Parris’ father lost his leg in a motorcycle accident because of another person’s negligent driving. Rex experienced firsthand what happens to a family when a member is severely injured through no fault of their own.

“I understand from personal experience that when the breadwinner of a family is killed or injured it’s not something that ends—it affects the entire family forever,” Parris says. “And that’s why I have committed my life to helping people overcome the physical and financial burdens that result from an accident.”

Over the years, Parris and his team of attorneys and staff members, which has grown to more than 75 people, have obtained many impressive results for their clients: In 2009, Parris was lead counsel in securing a historic defamation jury verdict of $370 million against Georges Marciano, the founding designer of Guess Jeans.

“What differentiates us from other law firms, and allows us to achieve these record results, is the personal attention we bring to each and every case,” Parris explains. The firm’s clients all have a team working on their case. In addition to the attorneys representing them, the team includes a case manager, an investigator, as well as former insurance company adjusters who have been recruited from the nation’s largest insurance companies.

In addition to being a celebrated trial attorney, Parris is the mayor of Lancaster, California. As a result of his efforts, his city will be the first net-zero city in the world. He is an internationally sought-after speaker on climate change, alternative energy, and within the legal arena. Recently, he delivered keynote speeches throughout North America, Asia, and the Middle East.